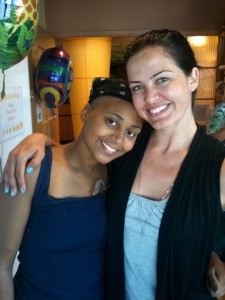 I founded the Apple a Day Program in 2011, in memory of a courageous 16 year-old girl. My friend Brittany Hamilton was the bravest person I’d ever known. We became friends in 2008 at a charity event. She was a 14 year-old bald headed badass; we hit it off right away. My goal was to show Brittany the world of music, radio, to give her access to experiences she may not otherwise have had. What I didn’t realize through the course of our friendship, was that Brittany would teach me more than I could have ever shown her.

On her 16th birthday, I sat in the hospital with this fearless teenager trapped in a hospital bed. All she wanted was to connect with her friends. I had just bought a new iPhone & thought to myself how incredible this device could be for her. Once she got out of the hospital that time around, we were off on a shopping spree to get her an iPhone of her own. I put her on my plan, my family pitched in to buy her iTunes cards, and just like that – she was SMILING again. Texting friends, listening to music, sending me cat videos. It opened up a whole new world for this girl who had become accustomed to spending her time alone in a hospital. Brittany lost her decade long battle with neuroblastoma in June of 2010, just months later. It hit us hard. A child dying of cancer will never make sense. How could I keep her memory alive?

A year later on Brittany’s birthday, April 22, 2011, I founded Apple a Day in memory of my sweet friend. Our goal: “Keep Kids Connected While Fighting Cancer.” I witnessed firsthand how life-changing this small device can be. Since launching the program, we have donated 200+ iPads to children battling cancer. It has been an honor to spend time with these children & families with the same courage that my friend Brittany had.

I think of Brittany every time we surprise a child with an iPad. I make it a point to share Brittany’s spirit which each of them. My goal has always been to bring love, laughter, and positivity to these families who endure so much. In turn, I have become so inspired by these little heroes, gained so much love, and it is a huge privilege to call them my Apple a Day family.

Learn more about us: www.AppleADay.org

Donate to Apple a Day

This message is only visible to admins:
Unable to display Facebook posts

Error: (#10) This endpoint requires the 'manage_pages' or 'pages_read_engagement' permission or the 'Page Public Content Access' feature. Refer to https://developers.facebook.com/docs/apps/review/login-permissions#manage-pages and https://developers.facebook.com/docs/apps/review/feature#reference-PAGES_ACCESS for details.
Type: OAuthException
Code: 10
Click here to Troubleshoot.
This error message is only visible to WordPress admins


Error: Access Token for appleaday4kids is not valid or has expired. Feed will not update.

This error message is only visible to WordPress admins


Error: Access Token for appleaday4kids is not valid or has expired. Feed will not update.