Austin Pop Singer Jayda is winning fans at a rapid pace both outside & inside the music industry. The recent Grammy Award celebration was one of the social highlights of her young career.

The Grammy Awards is something that’s looked forward to by musicians all year long. This year rising 18-year old Austin, Texas Pop singer-songwriter of the hit song “Boys Like You” that can be heard HERE, felt very blessed to be able to make it to attending the Warner Brothers Grammy Pre-Party, watching the Grammy Awards themselves at a private get together, meeting many of the stars she has looked up to, and taking part in a number of electrifying interviews. All signs Jayda’s music, name, and hypnotic personality is making it’s way through the music world which is nothing but good news for the young, talented, and passionate star-on-the-rise. Some highlights can be seen on Jayda’s ever-active Instagram HERE. 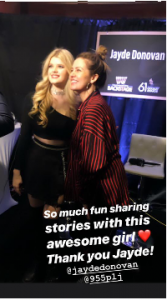 “This was an amazing part of my trip across the country to promote my music,” commented Jayda. “I was able to meet so many wonderful people and they all really treated me great and were totally encouraging.”

Counted among those who encouraged Jayda to continue in her quest to become a pop superstar was Bebe Rexha who she met at the Warner Brothers Pre Party, and had nothing but kind and supportive words. Jayda had with her for the fun, glitter, and glamour at all the events, fellow Texas-girl her dear friend Gracie Bailey which made things even more special.

At the Westwood One Backstage at the Grammy Awards Show Jayda was interviewed by a number of top radio and online shows including Pop Crush, The Bert Show, and by Jayde Donovan who has the largest syndicated music show that appeared at the Westwood One Backstage event, with all of the interviews going remarkably well and displaying Jayda’s infectiously positive personality and musical ability.

To keep up on the latest news from Jayda visit her website at https://www.jayda.press.

Jayda is the next breakout pop artist. Jayda has worked alongside Grammy Award-Winning producers: two-time Grammy Award-Winning Producer, Chad Carlson (Taylor Swift), nine-time Grammy Award Winner, (Tom Coyne), and Ryan G. Clef. She has studied dance, writes, & performs her own music and she\’s only 18-years old. Jayda spent most of her life growing up in the “Live Music Capital”, Austin, Texas where music was always a part of her family.

Her great grandfather RT Rea was a singer and would play both the guitar and harmonica when she was young. Her grandma Necia Rea was a church choir leader. “I write pop music because the music is so upbeat and energetic, and I love to dance,” Jayda explains.

When Jayda’s not making music, she enjoys spending time with family and volunteering her time with several charities and organizations helping women and children.

This Genius Breastfeeding Hack Provides Mama With Pain Relief AND a Snack, So Sign Us Up! [PopSugar]Press

Westwood One Celebrates the Hottest Artists in Music with Exciting Content, Live Performances, and Backstage Interviews at the “2019 Billboard Music Awards” [RadioFacts]Press